The Club Patron at golf Clubs has, in the history of Australian Golf Clubs, evolved quite significantly over the years. Across the country there are numerous Club Patrons of remarkable caliber such as Peter Thomson at the Nomads Golf Club in Perth who was one of the most astounding golfers of all times. However, the role of the Patron is not only that of representing the Club from a golfing perspective. There are many other roles and functions that the Patron carries out throughout their tenure. This year, at the Wentworth Falls Country Club Annual General Meeting, Winston Pickering was elected as Club Patron. Winston has been a member for many years and has always been both an avid golfer and a strong supporter of the Club.

As homage to his involvement with the Wentworth Falls Country Club over the years, we will explore the significance of the Club Patron and review Winston’s milestones and contributions.

What is a Club Patron?

Nowadays the role and function of a Club Patron is merely representative. They are called upon to support the Club with their presence and to diligently promote the Club through their contacts and word of mouth. Furthermore, Patrons are well known figures in the community and their values and traits often coincide with the values and principles of the Club itself.

This role has changed quite considerably over time.

Historically, Club Patrons had a more prominent position within the management of the Club as they were called upon to support the Club financially in the event of poor performance. It would be challenging to find Club Patrons nowadays, had that still been the case, as many golf Clubs are in financial hardship and require conspicuous amounts of investment to return to a profitable position.

Club Patrons were typically reasonably wealthy and well connected in the community. Furthermore, they were expected to have a substantial amount of influential contacts to aid the Club in achieving their financial, golf related and community-focused objectives.

Who is Winston Pickering?

Winston Pickering has always truly enjoyed the Blue Mountains and used to often visit Wentworth Falls prior to the 1970s. He would regularly stay at a private boarding house called the Lilacs that was off the 3rd hole of the WFCC golf course. Soon after marrying his beloved wife Jeannette, he moved up to Leura in the late 1970s after a fascinating career in the real estate business.

Winston was principal and co-owner of Top Ryde Real estate which operated in metropolitan Sydney. Winston also operated in real estate in many suburbs as far afield as Ashfield, Maroubra, Double Bay and Ryde. He was also very active in the real estate community as Chairman of the Property Management Division of the Real Estate Institute for many years and a member of the Fair Rents Advocate.

Interestingly, he was also active from an academic perspective, lecturing at Sydney University and the Real Estate Institute on property management.

His accolades are numerous and his success was recognised in both the professional and academic worlds.

He joined the Wentworth Falls Country Club in 1961 having fallen in love with the Blue Mountains and wanting to spend more time on the golf course.

In 1968 he joined the Committee and was appointed Club Captain. He maintained this position for 15 years. Subsequently he was elected President of the Club in 1983 and held this position for 15 years until 1998. He was reelected President in 2004 until 2005 for a grand total of 53 years as member, 15 as Captain and 17 as President. In addition, Winston has been the Blue Mountains District Golf Association Captain for 10 years and President for 17 years. What an absolutely impressive career he has had!

From a golfing perspective Winston has been an avid golfer since day 1. He has always been active on the course at least 3 times a week and has achieved some remarkable results throughout his golfing career. He has been a successful A Grade Pennant Captain 3 times and a successful Senior masters Captain as well. Worthy of mention is also his astounding record of 11 hole in ones during his golfing career.

All in all Winston Pickering has excelled in various areas from a personal, professional and golfing point of view.

Why was Winston chosen?

Matt Lark, Secretary Manager at the Wentworth Falls Country Club was asked to pinpoint three traits that make Winston an excellent Patron for the Club. Having known him for over 10 years, Matt confidently answered by stating that he is first off a very dedicated individual. It is uncommon to find people who serve on Committees for over 3 decades, especially people who serve over 15 years as President and then get reelected for a second term.

Secondly Matt mentioned how passionate Winston is about golf. Winston has been frequenting the Clubhouse and the golf course for 53 years, making him one of the most senior members at the Club. Only a handful of people throughout the history of WFCC have received life membership and Winston is most definitely a worthy member. In relation to golf, Winston has been on the course at least 3 times a week and to this day, even though he is over the age of 80 he still golfs. As a golfer he has achieved great recognition and noteworthy positions within the local community as detailed above.

Matt also mentioned that Winston has many positive traits and acts as a pillar of golfing tradition in the Upper Blue Mountains. Although he lives in Leura, Winston has always supported the Wentworth Falls Country Club and has been present for almost every social event. Being such a tight nit community, Winston has undoubtedly had a pivot role at spreading the word about the Club and involving family and friends in the promotion of its facilities and events. Matt is very grateful to Winston for all his efforts throughout the years and the continued support both on and off the golf course. 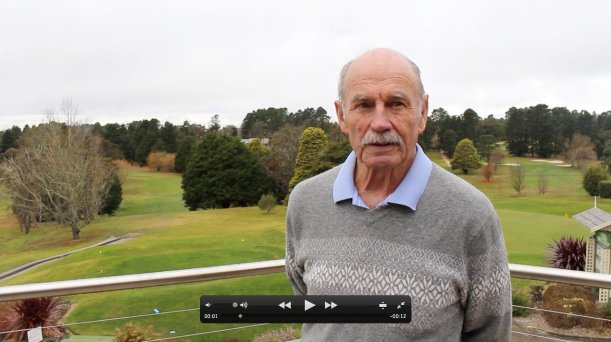 WFCC and the importance of the Community

The WFCC is committed to providing the Community with a friendly and professional environment for members to engage in social and sporting activities.

The Wentworth Falls Country Club is delighted to have nominated Winston Pickering as the Club Patron and believes Winston will proudly represent the values of the Club in the Community.

Should you wish to offer your support and commend Winston for his nomination please comment below. We would also be delighted to hear if you have any great stories of classic golfing and WFCC Clubhouse moments featuring Winston Pickering.